Umbrella Academy Season 3: Release Date, Cast, Trail and Everything We Know So Far

Season 3 of Umbrella Academy is set to premiere on our streaming services very shortly.

Season 1 kept us on the edge of our seats when the seven separated brothers reunited at their father, Sir Reginald Hargreeves' funeral, only to be attacked by the apocalypse. They attempted to flee the apocalypse by traveling back in time to the 1960s. The siblings, on the other hand, are pursued by Hazel and cha-cha, the Commission's time-traveling operatives, for breaking the chronology.

In Season 2, when the siblings are separated across Dallas and Texas during a three-year span, the time leap decision proved to be dangerous. There, the siblings are confronted with a new apocalypse, this time based on the assassination of John F. Kennedy in 1963.

The siblings are back in their own time (or are they?) in the concluding episode of Season 2. However, they are astounded to see their deceased father alive and well, accompanied by six other members who appear to be Brellies' doppelgängers. Ben, the loving brother, has also resurfaced, but he isn't the same nice guy he used to be, and he doesn't recognize his siblings. We have no idea what he's up to.

Have I piqued your interest? Read on to learn everything there is to know about Umbrella Academy Season 3: the release date, actors, plot, and more.

When will Umbrella Academy Season 3 be released?

It's a fact. Season 3 of the Umbrella Academy will premiere on Netflix on June 22, 2022, and it will be packed with the same amount of suspense. Now that the filming is finished, all ten episodes will be released on the same day.

Umbrella academy season 3: Who will return from the cast?

Season 3 has already piqued the interest of the audience. So, let's get down to business.

The following cast members will return for season 3 of Umbrella Academy:

In addition, Lila (Ritu Arya), one of the 43 super children, will return after disappearing from time-travel briefcases.

What can we expect from the third season of the Umbrella Academy?

Season 3 of the Umbrella Academy is due to premiere this year, and fans are anticipating yet another round of time travel, sibling rivalry, and mind-blowing shocks. Here's what to look forward to in the superhero series:

Umbrella Academy season 3 will see the estranged brothers return to their time after avoiding the second apocalypse, only to be replaced by the Sparrow Academy, according to @NetflixGeeked. The members of the Sparrow academy have the same appearance as Brellies. However, things are far from normal at the Hergreeves, as Sparrow Academy quickly engages in a violent brawl with the Umbrella Academy.

Season 3 will most likely reveal what is wreaking havoc in the universe, as well as how the dysfunctional siblings will deal with the obstacles and losses. Will the siblings be able to persuade their father to put a stop to the destruction? Will they ever be able to resume their lives before the apocalypse? This year, stay tuned for answers to these perplexing topics.

Is there a trailer for Umbrella academy season 3?

No, Netflix hasn't published the Umbrella Academy Season 3 trailer yet, except for a brief teaser titled "The Sparrows have Landed," in which Umbrellas face off against Sparrows. Luther and "pseudo" Luther approach each other, implying that a violent confrontation is imminent. The teaser is enough to pique our interest and make us even more eager for the full release.

Where can I see Umbrella academy season 3?

Umbrella Academy season 3 will be available on Netflix, just like the previous seasons. Once the season is out, fans can binge-watch all of the episodes to make up for the long wait.

How do I watch Umbrella Academy Season 1&2 offline?

When your Wi-Fi is inconsistent, your streaming experience suffers, and you roll your eyes. StreamGaGa Netflix Downloader, on the other hand, allows you to download your favorite Netflix shows and watch them offline, free of commercials and interruptions. It enables you to download your videos at a fast rate and to enjoy constant action streaming in HD quality.

The Umbrella Academy series will have you wanting to learn more about time travel, see action-packed sibling rivalry, and see how they try to avoid the impending apocalypse. Critics have praised and praised both seasons 1 and 2 of the show.

Based on Gerad's comic book, this series follows the seven dysfunctional siblings as they work together to unravel the mystery of their father's death and avoid the impending catastrophe.

After viewing the first two enthralling seasons, fans are eagerly anticipating the release of Season 3 so they may join the superheroes on their quest to discover the answers to the questions left unsolved in Season 2.

Unable to Connect to Netflix? Fix it with The Online Netflix TV Help System

How to Change Language on Netflix on Any Devices? 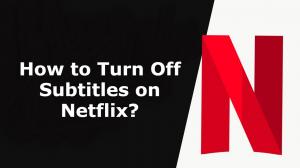 How to Turn Off Subtitles on Netflix? (2022 Updated)

Netflix has the best features, and subtitle with every video is one of them. But in some cases, you don't need a subtitle, and in this guide, we will learn how to turn off subtitles on Netflix.