Although the official Rakuten TV feature "download function" has been removed, it is still useful to record videos. Rakuten TV offers the following video titles.

You can quickly make a recording and save them for later use.

Rakuten TV video content cannot be recorded on any device including smartphones, tablets and HDD recorders.

This is due to the HDCP technology, which prevents unauthorized video recording.

This article will provide more information on this item and show you how to make videos with it.

You will see a black screen if you record normaly. But if you follow the tips in this article, it will be possible to capture beautiful videos!

You can record Rakuten TV by preparing the following items.

Except for the essential items required for video playback, such as a computer and internet connection, recording Rakuten television requires a dedicated recording program called " StreamGaGa Rakuten Television Downloader".

Rental videos, in particular, can be downloaded and saved in just a few minutes to your computer. This is an economic advantage that will allow you to rent the same title every time.

Although the full version has all the functional limitations, it is recommended that you use it. However, a trial version of the software is available for free. You can use this free version to test the software's performance.

This section will describe how to record video content using the video streaming service Rakuten TV.

Go to the following URL, and then install the recording program "StreamGaGa TV Downloader".

This will launch the "StreamGaGa Rakuten TV downloader"

What should you do if you are unable to download a video?

A reader sent me a solution to the problem of not downloading videos after following these steps. I would like to share it here.

To do this, right-click the downloaded software installer from StreamGaGa's official website and open the menu. Select "Run as administrator" for the software to be installed.

You can continue with the rest of the process as before. If you have any issues with the software, please run "Run as administrator".

The free trial version has a limit on the number of recordings you can make.

As I said, the "StreamGaGa Rakuten TV downloader" allows Rakuten TV to be recorded with simple operations. However, there is a limit on the number of recordings you can make with the free trial.

The trial version is limited to 3 recordings. If you wish to record more, you will need to purchase the paid version.

You can buy the paid version if you wish to continue recording video titles with "StreamGaGa Rakuten TV downloader" in future.

How to watch recorded videos?

This section will explain how to view recorded video data from video streaming service "Rakuten TV".

There are two main ways you can watch a movie. One is on a computer, the other on a tablet or smartphone. This is the most common way to watch a movie from a computer.

How to play video recorded?

It is easy to download a media player for free if you wish to view it on your computer.

The standard, free VLC Media Player is my favorite. It's easy to use and can be used by beginners without difficulty.

You don't need to pay anything for the software.

After you have launched VLC Media Player you can click and drag the video data that you wish to play into it. It will automatically play your video.

You'll also be able use the basic operations intuitively.

How to import recorded video data to your tablet or smartphone?

You can view the video data captured by the method mentioned in this article on your iPhone/iPad.

StreamGaGa Rakuten TV Downloader
You can use StreamGaGa to save your favorite videos so you can enjoy Rakuten TV offline. Rakuten TV offers about 200,000 videos online, including sports, movies, dramas, and anime.
Free Download See More >
Related Articles

A complete explanation of how to cancel Rakuten TV and what you need to know before cancelling your subscription.

This page explains the cancellation procedure of Rakuten TV with images. It is easier than you might think, and anyone can do it, but there are some precautions you should take before cancelling your subscription. 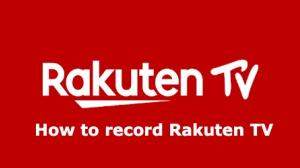 Although the official Rakuten TV feature "download function" has been removed, it is still useful to record videos.